A complete, permanent endoscopic release of the carpal tunnel is performed at only a few select hand surgery practices nationally. Less than 26% of hand surgeons offer this. You have researched and found the best! Dr. Ichtertz has performed about 15,000 of these since 1992. The nerves, arteries and tendons are safely out of reach of the special knife used to release the ligament. Only the tight transverse carpal ligament (TCL) that is crushing the median nerve causing the wrist and hand pain is released.

The same day of surgery you will probably be telling others that your suffering has ended! Our patients from many occupations return to their activities in just hours. NO BRACES, NO LARGE SCARS, NO PHYSICAL THERAPY IS NEEDED. Patients frequently tell us they're amazed!

Artist view of ECTR depicted with skin and muscle removed. The nerve, artery and tendons are protected by the steel sheath.

This is a cross section of the wrist during ECTR surgery. The arrow is pointing to the endoscopic knife that will release the carpal tunnel.

Crystals, copper bands, exercises, bracing, cortisone injections, etc. do not solve carpal tunnel syndrome. Traditional open surgery releasing four tissue layers, when only the transverse carpal ligament and the next layer (deep palmar aponeurosis) are causing the problem, is a little bit extreme. Dr. Okutsu of Japan proved this in 1986 but didn't publish his research until 1989.

Regardless of the size of the incision, traditional open carpal tunnel release ("filet-of-wrist") done by an incision in the palm of the hand tends to keep a person off the job or in a diminished capacity for 6 to 12 weeks or more (see OCTR results). Open carpal tunnel release has been associated with many side effects including sympathetic dystrophy or chronic regional pain syndrome (see CRPS), an unappealing visible scar, wound separation, pain from the damage of the palmar cutaneous nerve, and recurrence. 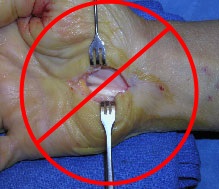 How the Cause of Carpal Tunnel Impacts Treatment

In 1946, Brain et al in England determined that carpal tunnel syndrome was related to having an entrapped median nerve at the carpal tunnel in six patients that were being treated. Later it was found by others that the myelin sheath (collective term for the Schwann cells wrapped around the nerve cells) would decay in response to pressure.

It was only in 1981 that pressure was proven to be the underlying cause of carpal tunnel syndrome at UC San Diego. Prior to this pressure was presumed to be the problem. This finding has created a bit of controversy and the study has been repeated numerous times in various centers around the world. Pressure within the normal carpal tunnel is almost zero. It goes up very little with changing posture of the normal wrist. Patients with carpal tunnel syndrome have substantially elevated pressure at baseline which increases dramatically with bending of the wrist.

How can pressure from carpal tunnel be released?

Questions continued as to what could be done to minimize the pressure in the carpal tunnel. Wearing a wrist brace at night prevents the marked increase in pressure that occurs with bending of the wrist, so it helps some people temporarily while they are waiting to have their surgery. Wrist braces do not solve the problem.

In 1986, Dr. Ichiro Okutsu took a group of patients with classical symptoms of carpal tunnel syndrome, confirmed their diagnosis with electrodiagnostic studies, inserted a pressure monitor into the carpal tunnels of these individuals and then, using a fairly large incision above the wrist, he reached into the wrist visualizing with an arthroscope and inserted a small knife allowing him to cut the transverse carpal ligament (TCL) compressing the median nerve. He then re-measured the pressure in the carpal tunnels and he reevaluated the patients. He noted after surgery that their symptoms promptly resolved.

The pressure was confirmed to have been relieved by pressure measurements, and the patients did very well. Before he published his research, Dr. Okutsu had completed a couple thousand carpal tunnel surgeries this way. In a follow-up study, Dr. Okutsu reported that additional tissue needed to be released in a large percentage of the patients at the time of the surgery in order to be certain that adequate decompression of the carpal tunnel had occurred. This subsequent research went largely unnoticed by the majority of the surgical community. Early adopters of endoscopic carpal tunnel release not paying attention to this had many dissatisfied patients going on to repeat surgery. This highlights that it is critical to pay attention to detail.

During carpal tunnel release surgery, the pressure is released from the carpal tunnel as proven in postoperative pressure measurements. This correlates with the elimination of symptoms. Symptom relief is noted immediately in those patients who were awakening at night because of numb or painful hands.

At the Nebraska Hand & Shoulder Institute, P.C./ Carpal Tunnel Relief Centers, Dr. Ichtertz uses a two-portal technique because he feels it is the safest. Coincidentally, it costs less and is eco-friendly by eliminating expensive disposables. Though laser has gotten a lot of press, it is just a hot knife and really has no place in endoscopic carpal tunnel release. If we were to use a laser in this procedure we would end up escalating the cost without improving the benefit. Also, the surgery would most likely take longer to do with a laser.